A hint of blue and a great scent too

🙁 We're all out of Blue Spruces this year! But, if you're after a beautiful bushy tree with a smashing scent, check out the Norway Spruce.

Although at its ‘bluest’ in the spring, the Blue Spruce will still often have a blue tinge at Christmas time. This tree also has a beautiful Christmassy scent. The needles are slightly longer than the Norway spruce, and it also has better needle retention. It’s important to note that the Blue Spruce has fairly sharp needles, so this may not be the best tree if you have young children. They will keep the cat off the tree, though! Read more.

Companies and growers measure Christmas trees in lots of ways, so on our website we’ve tried to keep it relatively simple: our measurements in feet are a minimum height to the top of the tree. So, if you order a 6ft tree it will be at least 6ft from the base of the trunk to the tippy top – typically, it will be a bit taller. Don’t forget to account for this potential extra height – sometimes up to 1.5ft for taller trees.

✅   You’re looking for a tree with a great scent

✅   You won’t have curious kids poking it

✅   You want something a little unusual

{We had a lovely tree last year, selected Nordman Fir for a baby’s first Christmas on the company’s advice, and it lived up to their claims, was a good shape and reasonably priced (especially considering that named-day delivery is included). Happy to order again this year.
Patricia
East Sussex
See More

The Blue Spruce (Picea Pungens) is for life, not just for Christmas. By that we mean it’s a pretty popular tree amongst keen gardeners the world over. Also called the Colorado Blue Spruce, this tree hails from over the pond; it’s native to the Rocky Mountains and grows naturally in New Mexico, Colorado, Utah, Wyoming and Montana. Unless you call those fine states home, you’ll most likely have seen it growing as an ornamental tree in parks or gardens.

You might’ve guessed that the needles on this tree have a blue-ish colour. We say blue-ish because the colour can vary a fair amount; some trees will have a striking blue appearance, some are more silvery-blue, some bluey-green and some much more green with a hint of blueness. You’ll see in the gallery below two examples growing side by side that have fairly different colours.

It’s Latin name, Picea Pungens, might make you think it’s named for it’s strong smell. If so, tut tut, you need to brush up on your Latin. Pungens actually means ‘pricking’ or ‘puncturing’, and it’s a pretty apt name – the needles on a Blue Spruce are extremely sharp. Even Farmer Tom, with hands tough and weathered beyond his years, will tend to stick a pair of gloves on when handling a Blue Spruce.

The Blue Spruce is relatively slow-growing and will only reach up to around 23m. It grows in a conical shape, with the strong branches reaching horizontally outward.

Identifying a Blue Spruce isn’t too hard – look for the colour and also the thick, sharp, rigid needles. Fresh needles (new growth) will often have a white powdery coating, which gives the trees a silvery appearance from a distance. It’s also the reason that the Blue Spruce can appear to be it’s bluest around Spring and Summer, with it being a bit darker green later in the season.

Most people choose the Blue Spruce because it’s unusual colour offers something different from your typical Christmas tree. It’s also popular for it’s:

Because of the sharp needles, it’s not a great choice if you have toddlers about the house.

"If you want something a bit different, the Blue Spruce is a spectacular Christmas tree." 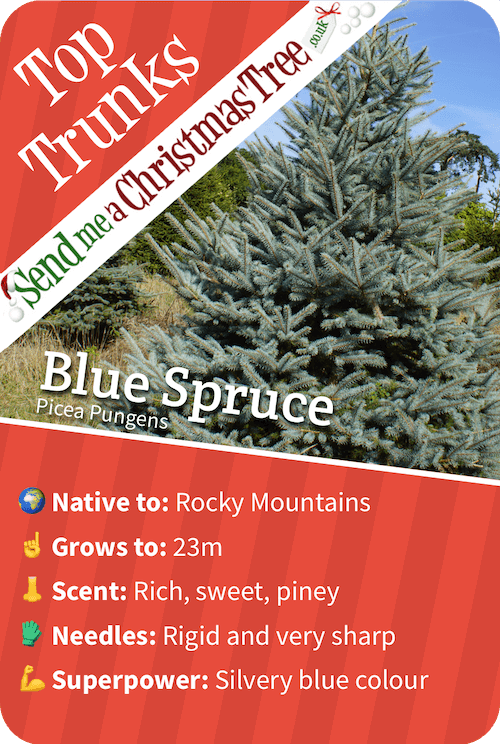