Go to CheckoutView basket “Norway Spruce” has been added to your basket.

This tree could be described as Britain’s original Christmas tree. The smell of Christmas that most of us grew up with, festive memories come flooding back whenever you get near one. If you’re a traditionalist this is as much a part of Christmas as turkey and the Queen’s Speech. Dark green with thin slightly prickly needles. The Norway Spruce is a great choice if you put your tree up a week or so into December (as it will dry out quicker in the warm), or at any time as an outdoor tree. Read more.

Companies and growers measure Christmas trees in lots of ways, so on our website we’ve tried to keep it relatively simple: our measurements in feet are a minimum height to the top of the tree. So, if you order a 6ft tree it will be at least 6ft from the base of the trunk to the tippy top – typically, it will be a bit taller. Don’t forget to account for this potential extra height – sometimes up to 1.5ft for taller trees.

✅   You tend to put your tree up a bit later, after the 1st week of December

✅   You want a bushy tree with a symmetrical shape

✅   You want a tree that smells amazing

{Just a note to thank you for the lovely Christmas tree that we had delivered. Everyone has admired it. The smell the beautiful shape and it has hardly dropped at all. It was such good value and delivered on the promised date. Why would anyone want the hassle of buying a tree and then struggling to get it home? We will definitely buy from you again.
Cherry
London
See More

If you grew up in the UK and are over the age of about 30, the Norway Spruce (Picea Abies) is the Christmas tree of your childhood. Found natively in Europe – particularly Northern, Eastern and Central areas – they are also one of the most widely cultivated spruces across the globe. You’ll see them growing across the UK, but the tree isn’t actually considered native to these isles (though it was introduced yonks ago).

"The smell of the spruce brings back all my childhood memories. For me, that smell is Christmas." 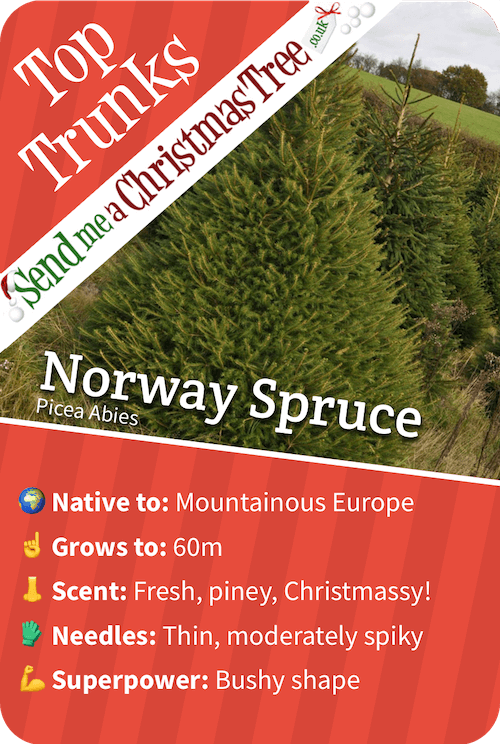 Buy Now!
1
1
Your Basket
Woo! You get free delivery.